History of the Stove-Top Espresso Maker

The story of the stove-top espresso maker begins in 1918, when Alfonso Bialetti returned to his native Italy from France, where he had worked in the aluminium industry, to start a small workshop manufacturing metal household goods.

The actual idea for the stove-top espresso maker came from a simple washing machine. During the 1920s Alfonso Bialetti observed the local women of Crusinallo washing their clothes in a sealed boiler with a small central pipe. This pipe would draw up the soapy water from the bottom of the boiler and redistribute it over the laundry.

Alfonso Bialetti hit upon the idea that he could adapt this washing machine and scale it down to make a simple coffee maker that would allow Italians to enjoy real ‘espresso type’ coffee in their private homes.

He began tinkering away, building various prototypes. His prototype stove-top espresso makers were manufactured out of aluminium. This was due to there being an embargo imposed by Mussolini’s government on stainless steel. As Italy had a rich source of bauxite (aluminium ore), aluminium became the ‘National Metal’ of Italy.

It was not until 1933, after solving many technical problems, that Alfonso Bialetti invented the world’s first stove-top espresso maker, the Moka Express. The distinctive design and octagonal shape of the Moka Express was based on a silver coffee service, popular at the time in wealthy Italian homes.

Alfonso Bialetti claimed of his Moka Express that “without requiring any ability whatsoever” one could enjoy “in casa un espresso come al bar” – ‘an espresso in the home just like in a bar’ (coffeehouse).

He began selling his Moka Express at local, and later regional markets, managing to make and sell around 10,000 units per year. It was not until after WWII, when Alfonso’s son Renato Bialetti joined the family business that sales of the Moka Express really took off.

Renato Bialetti realised the potential of the Moka Express and launched a major national advertising campaign. This risk was greatly rewarded, with increased sales; production levels had to be raised to a rate of around 1,000 units per day. The Bialetti Moka Express soon became the market leader in Italy, surpassing sales of the traditional ‘Neapolitan’ percolator style coffee maker, in which brewing occurs without pressure.

Not only did the Moka Express produce ‘espresso type’ coffee, which Italians adored, it also brewed coffee much quicker than its rivals.

Little Man With A Moustache

Many companies saw the success the Moka Express was enjoying and copied the design to manufacture their own version of the stove-top espresso maker. This is why, in 1953, Renato Bialetti came up with the idea of adding a company mascot to every Moka Express to help promote the brand identity that is Bialetti.

He used a caricature of his father Alfonso Bialetti to invent the “Omino Con I Baffi” – ‘Little Man with a Moustache’. This mascot proved popular as it created an image of an Italian father or fond elder relative who had lived his life in the coffeehouse.

The design of the Moka Express has hardly changed in over 70 years of manufacturing. Aluminium is still used to this day, as it is claimed that the residue of coffee from the previous brews that taints the sides of a Moka pot adds flavour and depth to future brews. This is why it is recommended that you do not clean your Moka Express too thoroughly. 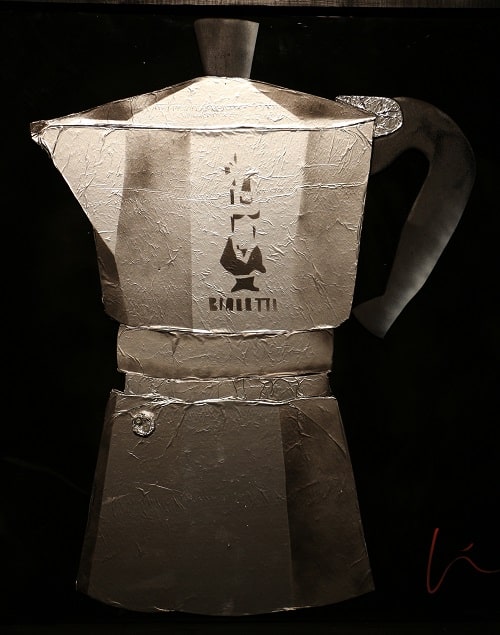