By the 17th Century, with the popularity of coffee ever increasing in Europe, the interest of the then World Superpowers – Britain, France, Netherlands, Portugal and Spain – also grew. Up until this point, coffee imported into Europe had come from the Arabian Peninsula, over which none of these nations had any control. The Europeans had sampled coffee and liked it, and now they wanted to start producing it for themselves. The race was on to establish their own coffee plantations in their respective colonies.

It was the Netherlands who took an early lead in this race. In 1616, Dutch spies successfully managed to smuggle a coffee plant out of Mocha (Yemen). Although, to begin with, they were only involved in small scale cultivation. This changed in 1658, when they defeated the Portuguese to take control of Sri Lanka. Very soon coffee plantations spread all over Sri Lanka and into Southern India. Then, in 1699, the Dutch started production in Indonesia, when cuttings were successfully transplanted from Malabar (India) to Java.

Without help from the Dutch, the other Superpowers would not have got out the starting blocks. By 1706, the first coffee beans from Java had reached Amsterdam, along with a coffee plant for the Botanical Garden. From this plant, a number of successful cuttings were made. These new plants soon found their way into various botanical gardens throughout Europe as they were given as gifts to visiting dignitaries.

One such plant was given to King Louis XIV of France in 1714, by the Burgermeister of Amsterdam. The plant was re-homed in le Jardin des Plantes in Paris.

Several years later, a French Naval Officer named Mathieu Gabriel de Clieu, while on leave from his station in Martinique, asked for the King’s permission to take a cutting of this plant back with him. Unfortunately for him, the King refused his request.

Convinced that the Caribbean would be an ideal place to cultivate coffee, de Clieu led a daring moonlight raid on the Jardin des Plantes to secure a cutting. 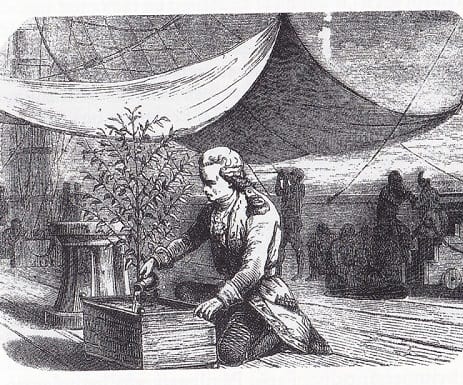 In 1723, de Clieu began his journey back to Martinique, with his newly procured coffee cutting in tow. He kept the shoot in a glass cabinet, which he would bring up onto the deck each day so it could be warmed by the sun. If de Clieu had thought that the hard part of his mission was over, he would have been wrong. As, during the journey, one of the men on board (allegedly with a Dutch accent) tried to wrestle the plant off de Clieu, managing to break a side-shoot in the process. The crew had to fend off an attack by pirates which lasted nearly a whole day; a storm descended that shattered the glass cabinet; and the portable water supply ran so low that de Clieu had to share his water ration with the plant.

Finally de Clieu returned to Martinique, where he successfully cultivated the coffee plant. Some twenty months later de Clieu had his first harvest, which he distributed among the island’s doctors and other intellectuals. As luck would have it, at the time the cocoa plants on the island were doing badly after a recent volcanic eruption, so coffee was soon adopted by the locals. Within three years, coffee plantations spread all over Martinique and to the neighbouring islands of St. Dominique and Guadeloupe. Coffee production was so successful in the Caribbean that King Louis XIV forgave de Clieu for his earlier transgression, making him governor of the Antilles.

The coffee plant had become a very desirable object. In 1727, the Brazilian government decided it was time they joined the coffee market. Using the guise of an intermediary in a boundary dispute between the French and Dutch in the Guianas, Brazil sent Lieutenant Colonel Francisco de Mello Palheta on a mission to steal a coffee plant from the French. Using his charm and charisma, Palheta befriended the governor of French Guiana’s wife. Once the dispute was resolved, the governor’s wife presented Palheta with a farewell gift, a coffee cutting concealed in a bouquet of flowers. From this scant shoot grew the world’s largest coffee empire.

The British did not seriously compete in the coffee race until 1796, when they took control of Sri Lanka from the Dutch. With the arrival of the British, even more land was cleared for coffee plantations. So much so, that the relatively small island of Sri Lanka briefly became the world’s largest coffee producer in the 1860s. However, in 1869, a lethal fungus known as coffee rust arrived on the island. This fungus causes premature defoliation of a coffee plant, seriously weakening its structure and reducing its yield of berries. Since rust was not considered to be a serious disease, the British continued to clear more land for coffee plantations during the next decade. It was not until 1879 that they realised the seriousness of the situation. Unfortunately by then it was too late: the productivity of the plants had declined so greatly that they were no longer economically viable.

Luckily for the British, a successful marketing campaign led by the British East India Company for tea entitled “the cup that cheers”, back in the early 18th Century, had laid the foundations for tea to become the British national drink. Between 1700 and 1757 the average annual tea imports into Britain more than quadrupled and consumption continued to grow steadily for the rest of the century. So when coffee rust devastated the coffee plantations of Sri Lanka, and later India, production simply switched and the coffee plants were uprooted and replanted with tea. Although Britain continued to cultivate coffee on a limited amount of colonial land, mostly in Jamaica, Uganda and Kenya, by the end of the 19th Century tea had surpassed coffee as the beverage of choice.