Caffeine is only one of several hundred chemicals found in coffee. However, it is the most notorious because of the many physiological effects it has on the human body.

Caffeine naturally occurs in many other plants apart from the coffee bush, such as tea and cocoa plants. You can also find it in a lot of carbonated drinks, Coca Cola perhaps being the most famous.

There is a long established link between coffee and mental stimulation, which gives a cupful a certain appeal. In fact, it could be argued that coffee drinking has helped change the course of history.

In 1773, it was in a Boston coffee house where citizens planned the Boston Tea Party; and in 1789, it was from Café Foy that Camille Desmoulins led the angry mob that later brought down the Bastille.

How Much Caffeine Is In Coffee?

This can depend on loads of factors, as you can see at the bottom of the page. So, it is hard to tell one cup from the other technically.

As a rough guide, if we say that a serving of coffee is an 8oz/230ml cup, there will be an average of 95mg when it has been brewed/steeped (such as with filter or manual coffee), and 30mg per spoonful with instant coffee.

An espresso averages 30ml, and has about 63mg of caffeine. This goes up to around 125mg for espresso-based drinks such as cappuccinos and lattes.

Decaf coffee still contains traces of caffeine as it is impossible to remove it all, but this will average just 3mg per cup.

Is Caffeine Good For Us?

Whether caffeine is actually good for us is a long and much-argued debate.

Caffeine is commonly used by endurance athletes to permit them to train for longer and aid their recovery afterwards. So, there is a positive effect on physical stimulation and muscle reaction.

Scientific studies have also linked it to the prevention of Parkinson’s and Alzheimer’s disease. It is also high in antioxidants, which studies have shown has a positive effect on health.

However, too much caffeine can lead to insomnia, heart palpitations, diuresis, gastrointestinal disturbance, arrhythmia, psychomotor agitation and osteoporosis.

It is also an addictive chemical, and can cause withdrawals if you choose to cut down or go ‘cold turkey’ for a while. But caffeine does affect people very differently, so the symptoms shown by your friend after a large macchiato may not be felt by you. 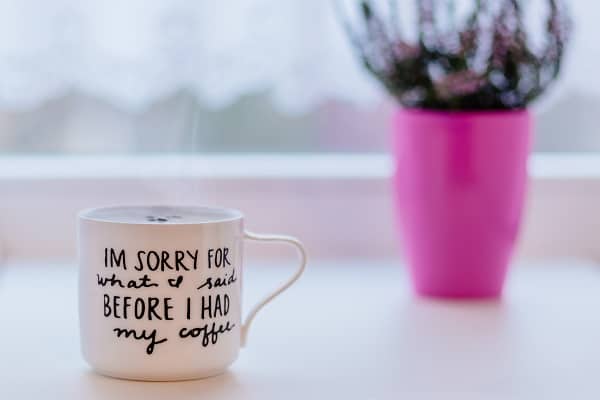 How Much Caffeine Should I Drink Per Day?

This wildly varies between person to person, due to the effects of caffeine as discussed above.

But the safe level on average tends to be around 400mg of caffeine per day. This is 3 to 4 cups depending on how you brew it.

Studies have shown that those who drink three cups per day are 17% less likely to die young compared to abstainers. The risk of a heart related death falls by a fifth, and it can help with activity levels.

Listen to your body when drinking coffee. If a second cup makes you shaky, and you suffer from a big drop in the afternoon, don’t fight your way to a third cup just because of the study above.

How Can I Reduce The Amount Of Caffeine In My Cup?

Wondering how to cut down on coffee without actually cutting out the coffee?

You can alter the amount of caffeine in your cup, as opposed to the amount of coffee – it is always worth using a Coffee Calculator to ensure you aren’t overloading though.

The amount of caffeine in an average cup of coffee (8oz/230ml) varies from between 80 to 150 milligrams. This variation is due to several factors:

The main difference is caused by from where, and from which variety of plant, the coffee beans are harvested.

As caffeine has natural antifungal properties, coffee plants grown in environments less favourable to the growth of fungal spores contain less caffeine. At high altitudes, the temperature and humidity are such that spores germinate too slowly to have too much of an effect on a coffee plant.

So, generally speaking, the higher the altitude at which a bean is grown, the lower its caffeine content. Also, Arabica beans typically have half the amount of caffeine when compared to Robusta beans.

The roasting process alters the amount of caffeine in a bean. A common belief is that the darker the roast level, the lower the caffeine content. This is generally true for some beans, but not all, and can sometimes have little impact.

Caffeine has a very stable structure with a boiling point above 315°C, well above roasting temperatures which rarely exceed 245°C. Nevertheless, a small amount of caffeine is usually lost due to sublimation, where a substance changes directly from a solid state to a gaseous one. This occurs in caffeine at approximately 175°C.

It is usually thought that drip makers coffee can increase the amount of caffeine in a cup. It is more likely that the water will touch more grounds using a filter or drip method versus using a steeping method such as a moka pot or cafetiere. This is why espresso has to be tamped before the water starts pouring, so the grounds are packed in more tightly and the water can’t escape through gaps without touching all of the grounds.

We have said that the average serving is around 230ml. But although espresso (around 30ml) has more caffeine per volume compared to regular coffee, it usually contains less per serving as you aren’t getting as much.

However, the effects will be felt more quickly with an espresso, and wear off faster, as caffeine is absorbed more rapidly when taken in concentrated doses. Which is why it is so popular for a ‘quick fix’.