Decaf coffee is becoming increasingly popular. It is thought that its popularity has soared amongst the Millenial generation, as the caffeinated version is doing too good a job at keeping people awake.

Researchers at Kantar Worldpanel found that sales of instant decaf were up 20% in 2019 compared with two years previously. A lot of people now care about the taste of their coffee over the wakening effect, and in response, decaffeinated coffee is no longer the disgusting brown cup of off-water it once was.

There are therefore dozens to choose from, and the decision can be tricky, so we have picked out some of our favourites below. Whether you’re looking for that traditional coffee flavour or something specialist, we have something for everyone below.

Taylor’s needs no introduction, with their coffee bags and beans always making a feature in our Top 10’s.

These beans have been decaffeinated using a natural water method and then roasted to produce a smooth taste with a hint of caramel, toffee and nut. Roast 4 makes it nice and strong for use in a cafetiere where the strong flavours emerge – just without the buzz afterwards.

They are also Rainforest Alliance Certified, so you know the environment they have been grown in is protected. 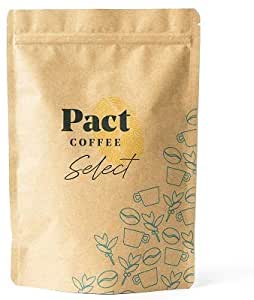 One of Pact’s most popular coffee blends, but in decaf. It is available to buy in various grind levels, whether you want to have a go at it yourself or buy for a particular machine.

The medium dark roast means it is ideal for use in delicate brewing methods such as pour-over or french press, and the chocolatey and candied fruit flavours will come through for a delicate, sweet twist.

Because Pact uses the Carbon Dioxide method to decaffeinate the beans, all of the flavours are left behind but 99.99% of the caffeine is extracted, and it is chemical-free.

The Asomuprisma blend comes from Colombia and helps support the Asomuprisma Women’s Association – a society made up of 20 producers. The group has the ultimate goal of creating leadership opportunities for women in coffee and by buying their coffee, you are only helping to further opportunities for female growers, so they can increase prices, independence and quality of their product! 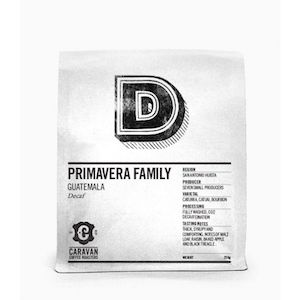 For those who are wanting to switch to decaf but really want to hang on to the flavour profile of coffee, this roast is ideal.

The flavour profile is described as thick and comforting, with hints of raisin, baked apple and treacle. It is single-origin from Guatemala, with beans from seven small producers, and has been created with this powerful flavour profile in mind.

As the name suggests, it is best for use in espresso but is also fine with milk drinks. 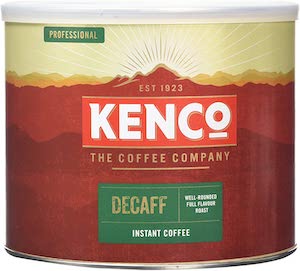 A barista-style blend which is ideal for making larger cups of Americano coffee. It is smooth and balanced, with a mix of freeze-dried instant coffee and roasted ground coffee to give you a bit more of a coffee boost than you’d find with ordinary instant.

A lot of reviews describe it as the best instant decaf coffee on the market, and there are remarks saying that they don’t even notice the difference versus the caffeinated stuff, which is great news for anybody making the switch who still wants the proper flavour.

All of Union’s coffee is hand-roasted in small batches, and it is served in speciality cafes all around the UK – in short, it is very decent stuff.

There is that typical coffee flavour in there but mixed with hints of dark rich chocolate and rich treacle. It comes as a whole bean, so you can grind it to your chosen level depending on the machine you’re using, and just before you use it for freshness too.

The process of removing the decaf is natural, with no use of chemicals, and the strength is roast 4 so it should still shine through when drank with milk and sugars.

Instant decaffeinated coffee is the most popular and widely available. A lot of people feel that if you’re going to pick a coffee with low caffeine in, then instant (which usually contains less caffeine anyway) isn’t an issue.

This Nescafe is made from 100% coffee beans, all carefully selected to ensure the proper coffee flavour comes through. It’s easy to make, as you just pour boiling water onto the grounds and allow to dissolve.

It can be used to make a longer Americano drink, with milk and sugar added, as the flavour still shines through. You still get a velvety crema and full-bodied flavour.

We love how it comes in a dedicated tin too, which keeps air and other nasties away from the coffee. Nescafe has purely used water to remove the caffeine too, so no chemicals have touched the beans.

A huge bag of coffee beans, which is ideal if decaffeinated coffee is your go-to cup at all times.

The beauty of having beans to hand is that you can grind them at home, to your chosen degree. Ideal if you will be using various methods of brewing depending on the flavour you want/how much time you have on your hands.

There is no smell of fresh coffee when you open the bag, but it tastes pretty close to the real deal once prepared. It is also quite light and fruity, so best if you want to drink it black.

Pre-ground ready for use in any coffee maker, this roast level 3 coffee is perfect for that authentic Italian coffee flavour without the buzz.

The mix of arabica and robusta beans creates that ideal cream, warm colour with a hint of dried fruit in the flavour profile. The grind is the best size for use in a Moka pot or cafetiere but is on the finer side, so also great if you also have pour-over or an espresso machine. 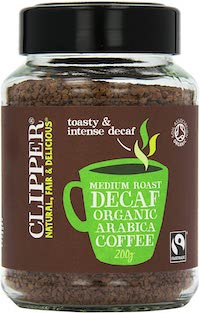 One of the most popular speciality tea and coffee brands in the UK, Clipper has created an instant coffee packed with flavours here.

It is organic arabica, and the traditional intense toasty coffee taste shines through, but there is also an intense aftertaste which is a bit nutty. Clipper is also certified with the Organic Soil Association. 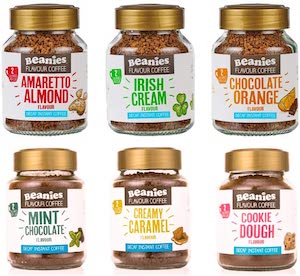 If you’re used to flavoured coffee and are making the decaf switch, you may want to also stick to flavoured decaf.

Beanies are a huge brand when it comes to the best flavoured coffees, and this selection of 6 instant jars is perfect if you love to keep a variety to hand. It contains all of their six most popular flavours, although they are all able to buy separately too.

They are sugar-free, only 2 calories per cup and vegan-friendly. There isn’t really any hint of actual coffee flavour in there, so the artificial flavours are overpowering – best for anybody used to them anyway, not if you’re just making the switch.

This is how the coffee comes and arrives on your doorstep.

It was once only common to see decaf coffee come as instant, which already naturally contains less caffeine. But now, with its popularity, specialty coffee makers have decaf available in whole bean and ground varieties.

Think about what you’d need with your coffee machine or method, and which is easiest for you as well. Instant is really simple to make anywhere for instance, but you don’t get that traditional coffee preparation.

If you use instant coffee, the most likely flavour will be the traditional coffee taste (although this won’t be as strong as when using caffeinated coffee).

But if you want hints of speciality coffee, with flavours such as chocolate and fruit, you will be best opting for whole beans or ground coffee. This is because the method of decaffeinating the beans can still keep the flavour there, but making instant coffee often loses the natural flavour of the beans unless it is artificially re-added.

It is worth bearing in mind that decaf coffee still contains small doses of caffeine – removing it all would mean no flavour is left behind. But less caffeine has been shown to also curb the issues which often come with drinking caffeine, such as heart palpitations, acid reflux and stomach issues.

How much caffeine is in decaf coffee?

This can depend on a lot of different factors, from the size of the drink to the method used to remove the caffeine.

Check out our guide on caffeine in coffee for how you can work out how much caffeine you will be having.

How is caffeine removed from coffee beans?

There are various methods, but a lot of high-end coffee companies will use a water method to ensure the taste remains but caffeine is removed. We have written a guide on how this can be done.

How do I make decaf coffee?

Just the same as ordinary coffee! Whether it be instant, whole beans in a bean to cup machine or ground coffee in a french press, there are no other steps or things to consider.

Decaf is considered safe for those who wish to be on the GERD diet, as it’s less likely to cause issues in your stomach. Just watch out for flavours such as fruits, however. We would still recommend keeping your intake low, too.