Coffee bags are essentially just like tea bags, except they contain ground coffee instead.

Favoured by those who travel, go on picnics or go to work and can’t have proper sufficient coffee making facilities, you simply pop the ground coffee bag in your cup or drinking flask and pour on boiling water. No machines, no complicated settings and no mess left behind.

They’re a great alternative to instant coffee, which contains a minimal amount of caffeine. So you can still have a proper cup of coffee without the fuss.

These are the best coffee bags which currently exist in this rapidly growing market. 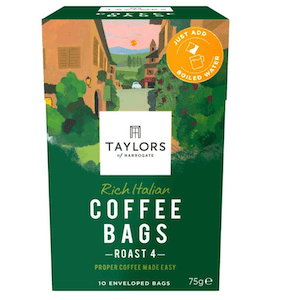 Choose from 30 or 80 bags, and three different blends for these Taylors coffee bags.

100% Arabica coffee, they feature the best grounds possible to ensure it tastes just like the real deal. All bags are individually wrapped for freshness, and it is inspired by the roast style of Northern Italy so there are hints of dark chocolate and almond in the flavour.

They’re also Rainforest Alliance Certified, helping the environment and ensuring that those who pick the coffee have sustainable livelihoods. The coffee bags are also compostable in food or garden waste bins, and Carbon Neutral too.

With 150 sachets per box, this serving should keep you topped up with coffee for a good few weeks and is our best budget pick.

Each contains 100% Arabica coffee, so you are getting that trusted taste similar to a real coffee shop or what you’d make at home from a machine.

It has been freshly roasted before being packed, and each bag is individually wrapped so you can take them into the office and rest knowing the bag you put in your cup is as fresh as possible and hasn’t been tainted in any way. You can also carry an individual sachet or two in your bag for those caffeine emergencies.

The No3 coffee is a nice smooth blend, which doesn’t leave a bitter taste and it is easy to get your desired strength by leaving the bag in just a bit longer. 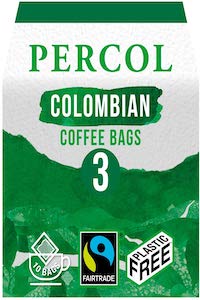 Fairtrade, single-origin and organic Arabica, all of these bags are plastic-free so you can save the planet while you sip your morning brew. Choose from Americano (strength 4), Colombian (3) or Espresso (6).

Did you know that Percol was the first ground coffee to be Fairtrade certified? They started the trend of using organic and single-origin beans, and to this day they still live by those standards. These bags are no different either, using only the finest coffee grounds.

They’re suitable to use in a cafetiere, and they go up to a really good strength if you leave them in your cup for a little bit longer.

Even though you don’t need the caffeine which is in a normal serving of caffeine, you still find the taste of instant decaf to be not quite right.

There are ten bags in each of the three packets included in this bundle, and they are individually wrapped to maintain freshness. Smooth and balanced, they are strength 4, with a hint of caramel and not a single sign that they are decaffeinated.

The sealing material isn’t conventional plastic, but a renewable, plant-based bioplastic made from corn starch. They are entirely safe to brew with as well.

These beans are so strong that they use a certain naughty word to name them – but you will have to look closely at the picture or click through to the product to see what that is – and they are described as “not for the faint-hearted”.

They are an intense smoky blend of Brazilian Arabica and Natural Robusta with a rich full body, and hints of plum, burnt caramel and toasted peanut and a lingering treacle finish. You still just add boiling water, allow to sit for a few minutes and then give the bag a squeeze to make the coffee, though.

Want to know just how strong they are? Think the Taylors of Harrogate Hot Lava Java Coffee Bags (which is the maximum they sell), and then take it up a notch. The rating of 5 Skulls also makes an impact. It stays black in colour, even after adding milk, and the host of 5* reviews says it all.

You get 50 bags in the pouch, which is resealable to keep it fresh. They are from the team at Moreish, who make a whole host of coffee bags, but these are the ones which really are for those who like a brew that can knock your socks off. 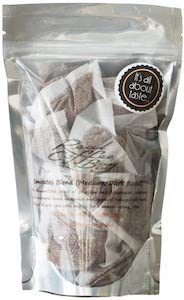 This is great quality coffee in handy bags to save washing up, mess and carrying lots of equipment.

It is small-batch roasted too, so every thought and care is put into it. 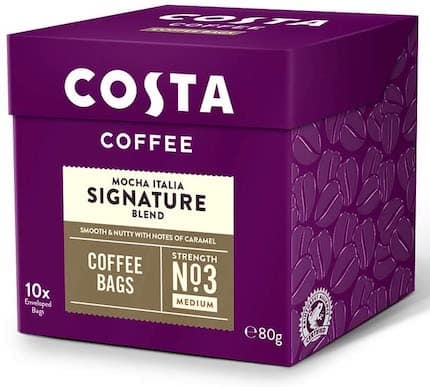 As the name suggests, these coffee bags are from a pretty big name in the coffee industry, so if you’re still unsure about just how good coffee bags are, it should confirm that they are worth the hype.

Created with Costa’s Mocha Italia Signature Blend, these coffee bags have a smooth and velvety taste. Ready in just 3 minutes, the flavour notes are nutty with slight caramel hints. You get ten bags in each packet, and they are medium strength 3 so should be a pretty solid choice if a few of you will be sharing them in the office, able to keep everyone happy.

And if you’re concerned about eco-credentials, these Costa coffee bags are certified by the Rainforest Alliance, ensuring sustainable farming to encourage sustainable livelihoods by transforming consumer behaviour. 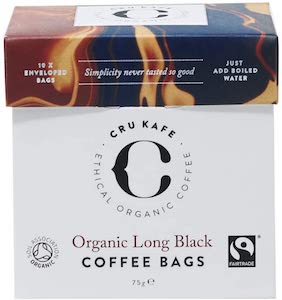 A brand which has long been one of our favourites, thanks to their pods. These bags are new, as they opt to bring us something even more convenient.

They are 100% Soil Association Certified, so no pesticides have been used in the growing of the beans, and 100% Fairtrade certified too, so those who have grown the coffee are treated well. The taste is dark chocolate and caramel, resulting in a big-bodied, caffeinated cup which will appeal to anyone after that traditional American taste.

These coffee bags are graded at Strength 9, and you just need to allow them to steep for 3-5 minutes before serving (with milk and sugar if you wish). 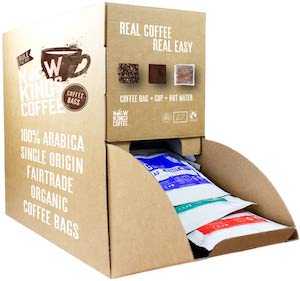 Organic coffee, which has people really raving about the quality, taste and eco-credentials. Plus, it is the best large multipack available to buy.

You have the option to pick exactly which bags you would like in the box – Light, Medium or Dark Roast, or Decaf, or a multipack selection of all of the above if buying for an office (or you simply don’t know which to choose).

All of the coffees are single-origin, from SE Asia, South Africa, Guatemala or Africa depending on the blend. The coffee bags are 100% biodegradable and contain absolutely no plastic. They’re made from a totally renewable source of corn starch and can be thrown in your food waste after use.

Plus, New Kings have teamed up with TerraCycle for the opportunity to recycle the foil sachets when you send them back to the manufacturers. They also provide full notes about the system behind the bags – they use selective picking and the wet method of processing and washing. They are then floor-dried in the open air. You can buy in a smaller packet, too. 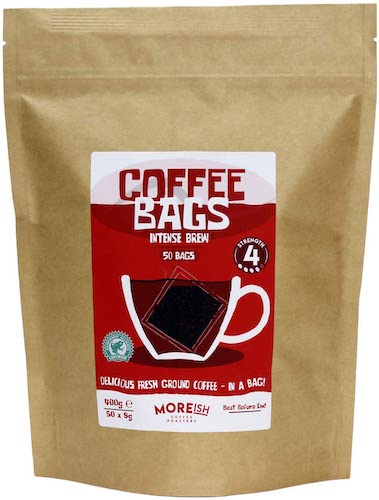 These are great for those who like their coffee strong and delicious, and the bags are delivered in a resealable pouch so they can stay fresh for longer. They are great value too, as seeing you get 50 bags included.

There will be a Best Before End date printed on each bag, so you can be sure to consume them when they’re still at their best. They do taste best four weeks after opening, however, so would be great for an office and monthly delivery.

As with all forms of making coffee (and indeed as with tea bags), the strength often increases the longer you leave the bag in the boiling water. But it is still good to get a blend which adheres to your tastes.

Most bags hover around roasting levels 3 to 6. Lighter roasts are light body, have a more acidic flavour and contain more caffeine, but those at the higher end have a more bitter flavour, less like their natural taste and more from the roasting process.

Many people opt for lighter roasts in the morning and something darker for taste later on, but most manufacturers offer different blends so if you find a bag you like the sound of, opt to try a few if you are unsure.

Packets of coffee bags can come in sizes anywhere between 10 bags and 50 bags. The latter is often better for value and will suit a coffee addict or someone who will be using the bags every day, and the former someone who wants them for the occasional ease they offer (such as at work or when on a weekend break).

You can also now buy in bulk, so have around 100 bags which is great for an office.

The price of a packet of coffee bags varies wildly depending on how many bags are in the box, the brand and the roast. In general, however, you can expect to pay anywhere between 15p and £1 per bag.

The former price would be good for anyone who currently uses a filter machine or cafetiere and wants to stick to the same price bracket for the bags, and the latter is still cheaper than a takeaway coffee so either way, they are great value.

Just like ordinary tea bags, some bags use plastic to glue the edges of the bag together so it doesn’t disintegrate in your cup. But with sustainability on everyone’s mind, many are moving away from this.

Percol is perhaps the best brand to go for if you want a guarantee to avoid plastic. But other brands such as Taylors Of Harrogate have compostable bags which are easy to deal with if waste is a concern too if you are wondering if coffee bags are compostable or recyclable.

New Kings Coffee are also very concerned about the planet, so you can even recycle the little tin foil packs which keep each bag fresh – the best of both worlds.

What is in a coffee bag?

Coffee bags contain ground coffee. A common misconception is that it must be instant grounds, but they don’t need to dissolve as they’re contained in the bag so it is pure coffee grounds like you would use in a cafetiere, filter or drip machine.

Can I use a coffee bag in a cafetiere?

Yes! They can be used in mugs, travel mugs or flasks as well as cafetieres. They are designed for mugs though, so you may need to double up on the bags used.

How do I get rid of a coffee bag?

Many can be thrown away in household waste, and some are compostable so will disintegrate over time.